You don’t need to have ever stepped foot on a dock to know that sailboats don’t normally fit in the trunk of a car. That’s what makes the TIWAL 3 such a game-changer.

Available now at the MoMA Design Store, the TIWAL 3 inflatable sailing dinghy can be packed into two bags for easy transport and storage and assembled in less than 30 minutes. Retailing for $6,195, it’s a much more affordable option than a standard (non-inflatable) sailboat. According to the financial blog mintlife, the cost of a 22-foot-long model would average $20,000. That’s in addition to the mooring costs, which depending on location and footage can run anywhere from several hundred annually up to a thousand dollars per month.

“We were absolutely stunned when we came across the TIWAL 3 Inflatable Sailboat,” says Emmanuel Plat, director of merchandising, retail at MoMA. “We were impressed by the ingenuity of the design and the quality of the materials used, not to mention the adjustable sail, which adapts to the wind.” Today, more than 800 Tiwal 3 boats are sailing in more than 45 countries. 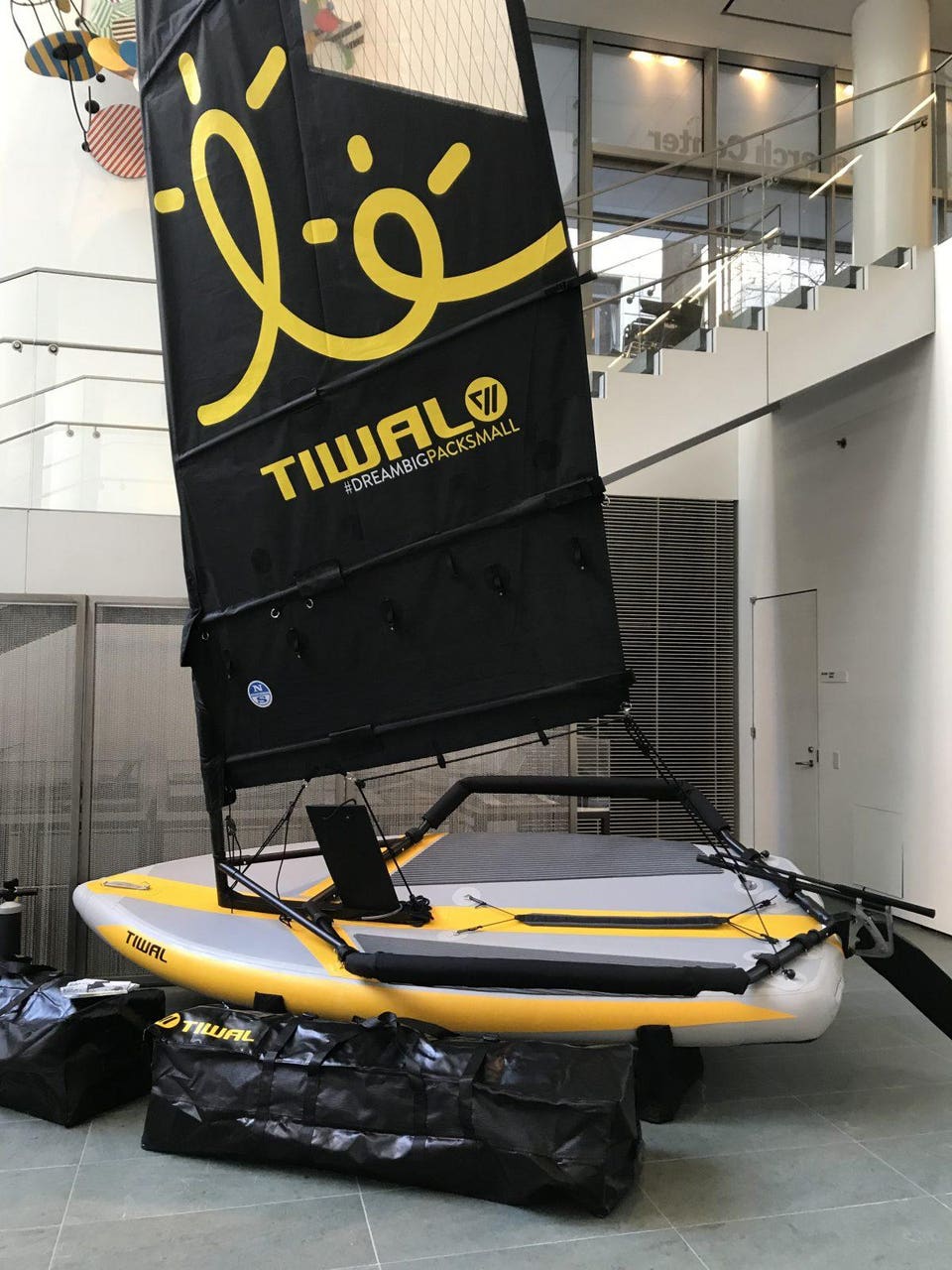 The Tiwal 3 on display at the MoMA Spring 2018 press preview event earlier this year.

According to the sailboat’s designer Marion Excoffon, TIWAL 3 is the first real, high-performing monohull sailboat on the market. While inflatable catamarans have been on the market for decades, they are bulkier and take much longer to assemble. “Many sailing lovers dream about having their own sailboat, but that comes with many constraints: storage, transportation, maintenance, access to a launching ramp. My challenge was to design a sailboat that would be easily transportable, user-friendly, and high performing.”

Behind that challenge was a more personal story: When Excoffon turned 18, she was forbidden to use the family cruising sailboat by herself. Not one to take no for an answer, she promised she would build her own boat. Tiwal is the first industrialized project by Excoffon, who is a graduate from ENSCI – Les Ateliers, a prestigious design school in Paris.

The designer funded the first industrial prototypes and the first production batch with bank loans and money from her boyfriend. “Then I turned to a fantastic investment fund, Newfund in Paris, which specialized in launching abnormal projects in 2014.” They went through a second round last year with Newfund and reached out for backers via the Proximea crowdfunding platform. “Now we’re ready to take on the world.”

The entire sailboat fits in these two bags. 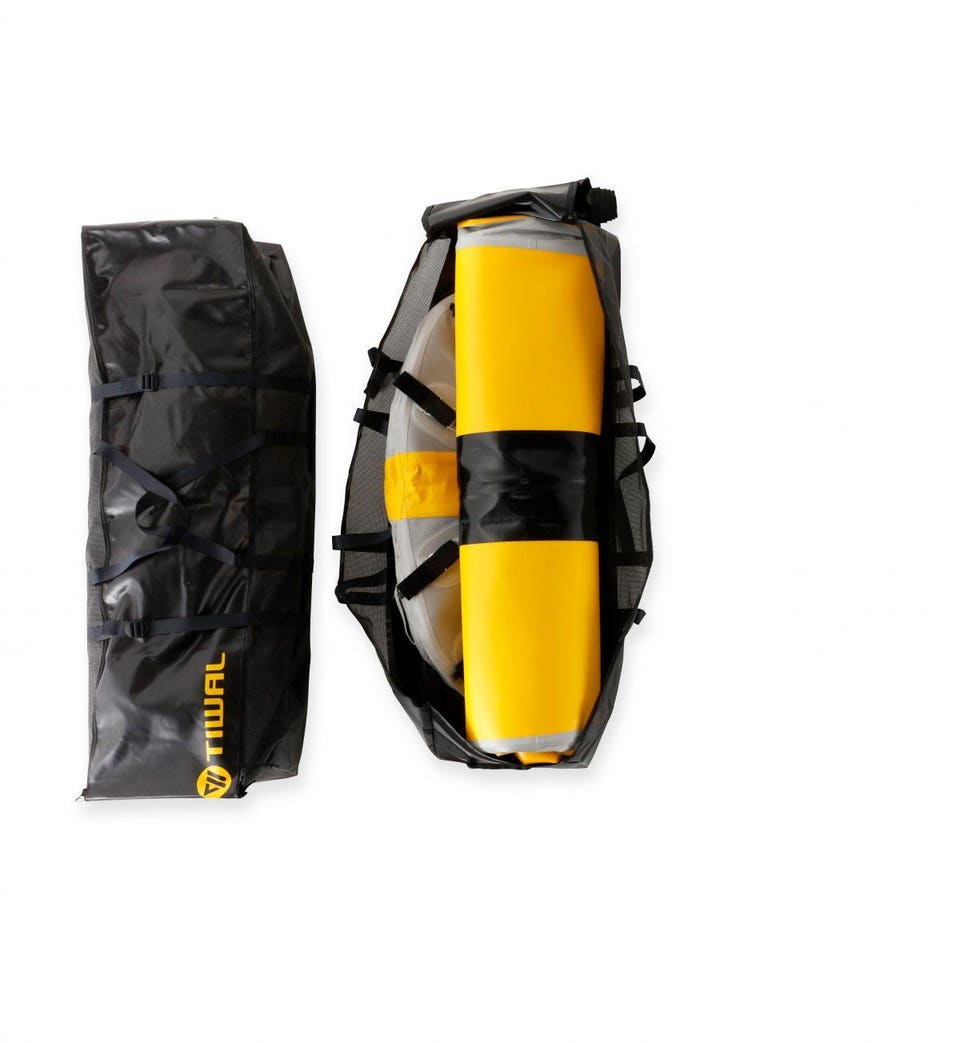 Made in France, the inflatable Tiwal can be packed in two bags for easy transport and storage.

The boat is made in France from a PVC drop-stitched material that consists of two layers of textiles connected by a multitude of threads that allows a solid rigidity when inflated at high pressure. “When I designed the boat, this fabric was always manufactured flat. The challenge was to find a solution to shape this material to create a hydrodynamic hull.” The patented sailboat design also uses a carbon mast and a monofilm and Dacron sail.

After succeeding with the inflatable hull, the next step was to develop the aluminum framework that would be solid enough to withstand the stress of sailing in strong winds but also be dismountable. Setting the framework on an inflatable hull added yet another challenge. “The interaction between the two parts could not be calculated by computers,” says Excoffon. “We had to try a number of prototypes. The hull and the structure have limited rigidity compared to the considerable hardships the boat has to undergo.” The combination of the two, under high-pressure inflation, allowed the creation of an effective structural cohesion and a unique design.

Excoffon is planning on developing more innovative inflatable boats to will put more people on the water, but she’s keeping the details secret for now. “The revolution is just starting.”

This article originally appeared on Forbes.com. Images courtesy of Tiwal except where noted.

This site uses Akismet to reduce spam. Learn how your comment data is processed.

Media Sponsor of Be Original Americas